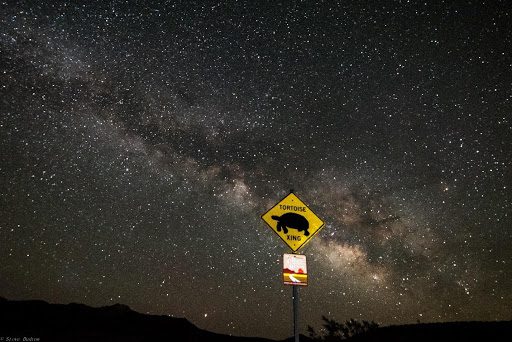 Winter may bring short, cold days, but on a clear frosty night the brightest stars of the year dazzle us. If you really want to see them in their glory, be sure to get away from distracting lights. The stars, bright though they may be, can not compete with Rudolf’s blinking red nose and other Christmas decorations if they are shining right in your face. So head out to Gold Butte for dark skies and great star gazing.

The main attraction up there is Orion, the Hunter, and all his friends. Orion is one of the few constellations visible from anywhere on earth, and with all his bright stars it is probably the most familiar constellations in the night sky. Early in the Winter he will be rising in the East just after it gets dark. Later the hunter will be higher in the South when twilight ends and the stars come out. Why is there a change in the orientation of the stars?  We are flying through space in our orbit around the sun at the dizzying speed of 66,000 miles over hour, and in just a few months our view of the universe shifts.

At the lower right corner of Orion, the blue white bright star Rigel shines with the power of over 60,000 of our suns. It is a long way out there in the cosmos and its light has taken over eight hundred years to reach us.

In the opposite corner reddish Betelgeuse has one of the strangest names of any star. Derived either from Arabic or possibly ancient Babylonian the name means “armpit of the giant” or maybe even the “armpit of the sheep wearing the white girdle”. In any case the “white girdle“ refers to the three bright stars all in a row right in the middle of Orion which we generally call his belt.

Below and to the left of Orion, see if you can spot Sirius, the brightest star in the sky. You will not be able to see it until after Orion is climbing up into the South. Known as the Dog Star it is one of Orion”s hunting dogs. For all its brightness it is not a particularly bright star shining at about twenty five times the output of our sun. It is quite close to us, the nearest star we can easily see this time of year. How close is it?  Hop on a nonstop flight, and you will arrive in about ten million years!

Up above Orion and to his right, look for a little dim “V” of stars. That is the face of Taurus, the bull, with whom Orion is locked in battle. The one brighter star is Aldebaran, the angry red eye of the bull. The name means “the follower” in Arabic. And who is it following?  The Pleiades of course, the little star cluster West of the bull. These were the beautiful Seven Sisters of Ancient Greece who were Orion’s would be girlfriends of his dreams. For  years he chased them across the countryside to no avail. Now the mighty hunter is doomed to pursue them across the sky each Winter night, but he never ever catches them.

The planets are in hiding for some of the Winter, but you can see Jupiter and Saturn low in the Southwest through most of December if you have a clear view down to the horizon in that direction. Notice that they are very close together in the sky. This event, known as a conjunction, happens only every twenty years or so. Mars, which dazzled us in October will be visible all Winter, but it fades to a rather inconspicuous orange colored object as Winter progresses. Venus is still the bright light in the East just before dawn. It will be slipping into the sunrise glow by the end of Winter, though. Look for its spectacular return into the evening sky next Summer.

Want to go deep into the Winter night? Grab a pair of binoculars and head out on a clear, moonless night. Let’s start with something easy. Just below the three bright stars of Orion’s Belt look for three more dimmer stars hanging down at an angle. Known as his sword, the middle one may look a little fuzzy. If so, it’s not your eyes playing tricks on you. You have spotted the Great Nebula in Orion, a place where brand new stars are being born right before your eyes. Your binoculars or a small telescope will show it even more clearly.

For more of a challenge try for the most distant object up there that can be seen with the naked eye, the Andromeda Galaxy. Use the constellation Cassiopeia and a star chart to find it. If you spot a faint smudge up there, congratulations, you have looked into the depths of the universe and seen light that has taken two and a half million years to get here.

Did I tell you to wear warm clothes? Star gazing is not an aerobic activity and it’s cold out there this time of year!

This site uses Akismet to reduce spam. Learn how your comment data is processed.